Other than the standard, general purpose container, many variations exist for use with different cargoes. The most prominent of these are refrigerated containers (a.k.a. reefers) for perishable goods, that make up six percent of the world's shipping boxes.[3][40] And tanks in a frame, for bulk liquids, account for another 0.75% of the global container fleet.[3]

Although these variations are not of the standard type, they mostly are ISO standard containers – in fact the ISO 6346 standard classifies a broad spectrum of container types in great detail. Aside from different size options, the most important container types are:[52][nb 11]

Containers for Offshore use have a few different features, like pad eyes, and must meet additional strength and design requirements, standards and certification, such as the DNV2.7-1 by Det Norske Veritas and the European standard EN12079: Offshore Containers and Associated Lifting Sets.[58]

A multitude of equipment, such as generators, has been installed in containers of different types to simplify logistics.

Swap body units usually have the same bottom corner fixtures as intermodal containers, and often have folding legs under their frame so that they can be moved between trucks without using a crane. However they frequently don't have the upper corner fittings of ISO containers, and are not stackable, nor can they be lifted and handled by the usual equipment like reach-stackers or straddle-carriers. They are generally more expensive to procure.

Flat racks and platforms are ISO containers that are used to transport heavy machinery. They do not have side walls, but may have end bulkheads and are often collapsible. 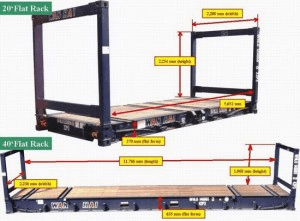 Open-top containers are shaped like a box and loaded from either the top or end. They are designed to carry heavy, tall, or hard to load materials such as coal or grain.

Insulated or thermal containers are suitable for transporting chilled and frozen goods, as well as temperature-sensitive materials and products. They have insulated walls, but are not refrigerated. 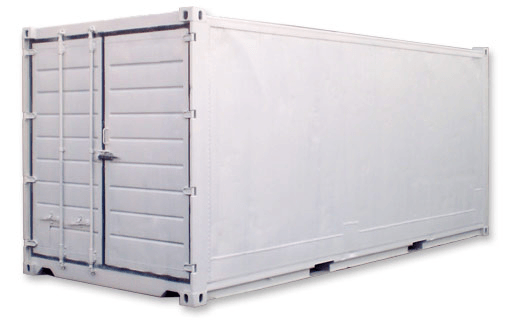 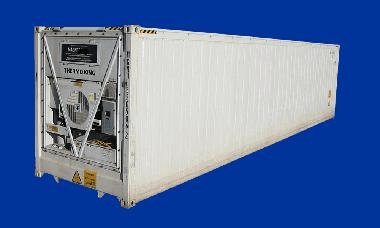 Tank containers are built to the same standard dimensions as other ISO containers, but are cylindrical vessels mounted in a rectangular steel framework. Typically, these containers are used to transport liquid or bulk materials. 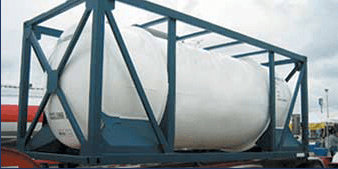 Pallet Wide containers have about 4 inches (10.2 cm) more internal floor width than standard containers to accommodate more Euro-pallets, common in Europe.[63] These containers typically have an internal width of 2.44 m (96 1⁄8 in), to be able to load either two or three of the 1.2 m (47 1⁄4 in) long by 0.8 m (31 1⁄2 in) wide pallets side by side. Many sea shipping providers in Europe allow these, as overhangs on standard containers are sufficient and they fit in the usual interlock spaces (or with the same floor panel the side ribs of pallet-wide containers are embossed to the outside instead of being molded to the inside).[64]

The 45 ft (13.72 m) pallet-wide high-cube container has gained particularly wide acceptance, as these containers can replace the 13.6 m (44 ft 7 3⁄8 in) swap bodies that are common for truck transport in Europe. The EU has started a standardization for pallet wide containerization in the European Intermodal Loading Unit (EILU) initiative.[65]

Australian RACE containers are also slightly wider to optimise them for the use of Australia Standard Pallets. 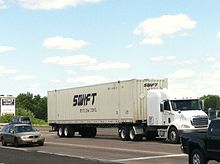 Generally, North American 53-foot containers were not constructed strong enough to endure the rigors of ocean transport, but in 2007 container carrier APL introduced the first 53-foot ocean-capable containers. All new, reinforced 53-foot boxes were built specifically for international trade and designed to withstand ocean voyages on its South China-to-Los Angeles service.[67] In 2013 however, APL stopped offering vessel space for 53-foot containers on its trans-Pacific ships.[71] Nevertheless, In 2015 both Crowley and TOTE Maritime each announced the construction of their respective second combined container and roll-on/roll-off ships for Puerto Rico trade, with the specific design to maximize cubic cargo capacity by carrying 53-foot, 102-inch wide (2,591 mm) containers.[72] [73] Within Canada, Oceanex offers 53-foot-container ocean service to and from the island of Newfoundland.[74] Fifty-three-foot containers are also being used on some Asia Pacific international shipping routes.[60]

In May 2017, Canadian Tire and Canadian Pacific Railway announced deployment of the first 60-foot (18.29 m) intermodal containers in North America. The containers allow Canadian Tire to increase the volume of goods shipped per container by 13%.[75]

The United States military continues to use small containers, strongly reminiscent of their Transporter and Conex boxes of the 1950s and 1960s. These either comply with ISO standard dimensions, or are a direct derivative thereof. Current terminology of the United States armed forces calls these small containers Bicon, Tricon and Quadcon, which correspond with ISO 668 standard sizes 1D, 1E and 1F respectively. This comes down to containers of 8 ft (2.44 m) height, and with a footprint size either one half (Bicon), one third (Tricon) or one quarter (Quadcon) the size of a standard 20-foot, one TEU container.[76][77][78]
At a nominal length of 10 feet (3 m), two Bicons coupled together lengthwise match one 20-foot ISO container, but their height is 6 inches (152 mm) shy of the more commonly available 10-foot ISO containers of so-called standard height, which are 8 ft 6 in (2.59 m) tall. Tricons and Quadcons however have to be coupled transversely — either three or four in a row — to be stackable with twenty foot containers.[79] Their length of 8 ft (2.44 m) corresponds to the width of a standard 20-foot container, which is why there are forklift pockets at their ends, as well as in the sides of these boxes, and the doors only have one locking bar each. The smallest of these, the Quadcon, exists in two heights: 96 in (2.44 m) or 82 in (2.08 m).[80] Only the first conforms to ISO-668 standard dimensions (size 1F).